Vikings: Valhalla is a brand new spin-off to History Channels signature Vikings series. The Netflix Original is coming globally at some point in 2021 and here’s an up-to-date roundup of everything we know about season 1 of Vikings: Valhalla.

Vikings: Valhalla is an upcoming Netflix Original historical-drama created by Michael Hirst and a spin-off of the popular History Channel series, Vikings. The series will be produced by MGM Productions like its predecessor.

Jeb Stuart is on board to write who is most known for his work on movies including The Fugitive from 1993, Die Hard from 1988, and is also currently working on The Liberator for Netflix.

What is the plot of Vikings: Valhalla?

Set over 100 years after the events of Vikings, the end of the Viking age draws ever closer as the Kingdom of England stands tall against its Scandanavian raiders. After the death of King Edward the Confessor, three lords make claim to the English throne, changing the future of England forever.

Which historical figures can we expect to see on Vikings: Valhalla?

It has already been confirmed that we’ll be seeing the following historical figures in action: Leif Erikson, Freydis, Harald Hardrada, and William the Conqueror.

Who is Leif Erikson?

One of the most famous Vikings from the era, Leif Erikson was a Norse explorer born in Iceland. He has been acknowledged by historians as the first European to have set foot on the continent of North America, hundreds of years before Christopher Colombus.

The sister of Norse explorer Leif Erikson. Fierce and brave, Freydís took a ship of men to reap the profits of Vinland and to set up her own colony. After the conflict with an opposing group of settlers, this leads to a massacre that made the warrioress famous in the Greenland Saga.

The King of Norway from 1046 to 1066, Harold Hardrada lead an invasion force against the Kingdom of England during a power struggle for the throne. Upon landing in England, he was eventually fought against the defending force of King Harold Godwinson at the Battle of Stamford Bridge, and would subsequently lose the fight dying during the battle.

The last Anglo-Saxon king in English history, after the victory at Stamford Bridge, King Harold had to face off against the invading force of William the Conqueror from Normandy. At the Battle of Hastings, the future of England was decided after Harold died in battle.

The descendant of Rollo, William the Conqueror laid claim to the English throne after the death of King Edward the Confessor. At the Battle of Hastings, William was victorious in his conquest becoming the first king of House of Normandy. William conquering England is wildly acknowledged as the end of the Viking Age, and the beginning of the German Iron Age in Britain.

Has the cast of Vikings: Valhalla been announced?

At the time of writing, no cast members have been confirmed for the spin-off series.

Will any cast members from Vikings star in Vikings: Valhalla?

All of the characters alive by the end of Vikings will have died by the start of Vikings: Valhalla. The only way any characters from Vikings could return is through flashbacks.

A character that could be subjected to this is Rollo as he is the ancestor of William the Conqueror. 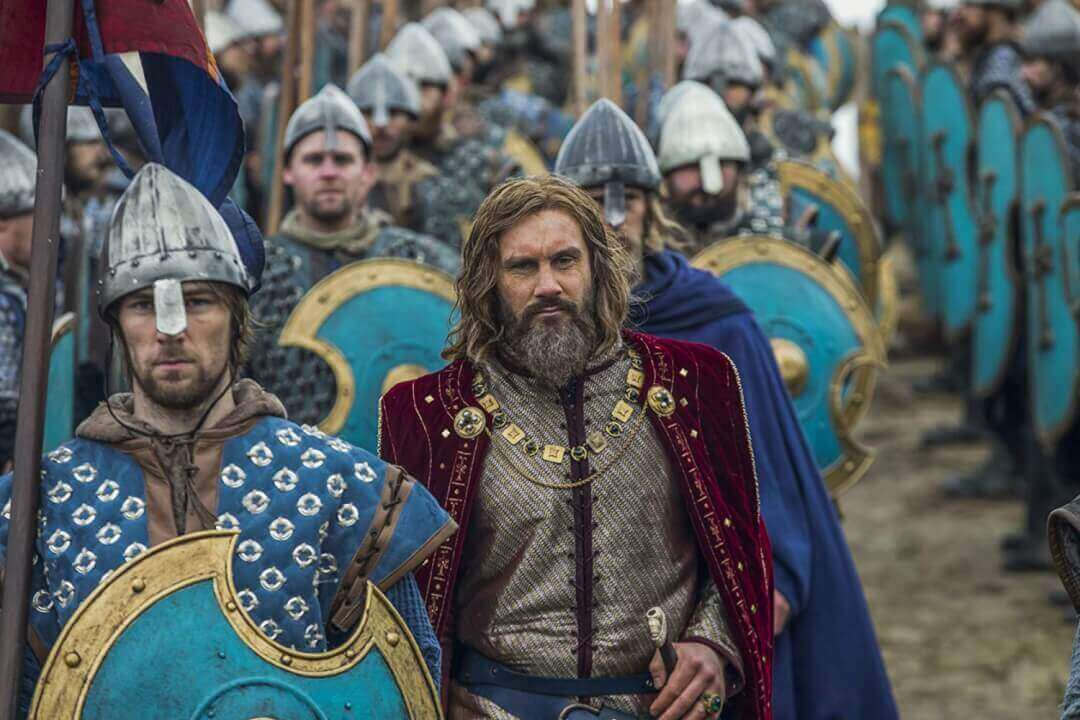 Will Vikings: Valhalla be historically accurate?

Historical-dramas always play it fast and loose with historical accuracy, and we expect the same of Vikings: Valhalla. We can expect to see plenty of historical events happen such as the Battle of Stamford Bridge and the Battle of Hastings.

Many history buffs may take issue with some of the historical inaccuracies we’re expecting to see. Thankfully history often plays out to have far more drama than any other work of fiction, especially when it comes to the English throne.

What is the production status of Vikings: Valhalla?

An early spanner was thrown into the works after two of the series producers, Morgan O’Sullivan and James Flynn, appeared in high court after accusations were made against them.

The German film company W2 Filmproduktion Vertriebs GmbH has claimed that O’Sullivan and Flynn diverted €40 Million of funds out of Octagon Films Ltd, a production firm they all have shares in. The court case will continue in January 2020.

Production on Vikings: Valhalla was initially planned to start in April 2020, but work was halted due to the COVID-19 pandemic. Now, however, things have finally started to ramp up again. We have learned that production is currently planned to commence this August (August 2020) and pre-production has already resumed as of July 2020.

Moreover, we’ve learned that extras are currently being cast for shooting. Sadly, we have no information on how long production will take, but with all the COVID-19 precautions in place resulting in a more sensitive schedule, it might take longer than usual.

Where will Vikings: Valhalla be filmed?

As mentioned above, pre-production has already resumed and the location is a very dear and familiar place for Vikings fans: Ashford Studios, Wicklow, Ireland. This is the place where most of the original Vikings series was being filmed for many years. To add to that, back in 2019, after filming of the final season of Vikings was finished, Ashford Studios secured permission for a €90m expansion, allowing them to build five new studios and support space. This will likely reflect on the production quality of Vikings: Valhalla.

With the main production hub being the same for Valhalla, we can expect to see many familiar external Irish locations that are just nearby. We can also expect many of the same crew working on the Vikings spinoff.

How many episodes will Vikings: Valhalla air?

It has been confirmed that 24 episodes of Vikings: Valhalla have been ordered. That is a lot of episodes for Netflix to commit to considering the typical amount is anywhere between eight and thirteen.

When is the Netflix release date for Vikings: Valhalla?

With the production starting soon and most likely continuing until next year as well as several months of post-production, Q4 2021 would be a decent estimate. Alternatively, it could be Q1 2022 if things get pushed back even more.

Will Vikings be coming to Netflix?

Unlike Lucifer and Designated Survivor, Vikings: Valhalla is not a continuation of Vikings and is instead a spin-off. This is important because previously, Netflix US eventually picked up all of the seasons from canceled network shows.

Vikings is currently available on Hulu and Amazon in the US, but the deal for Vikings: Valhalla is not likely to include Netflix receiving all six seasons of Vikings. This doesn’t mean Netflix won’t pursue Vikings when the license is up at Hulu and Amazon.

Are you excited for the release of Vikings: Valhalla? Let us know in the comments below!